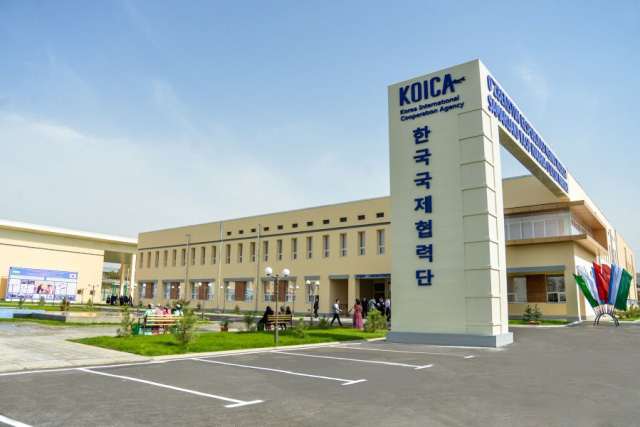 Vocational Training Centre, organized in the framework of the implemented by the Ministry of Labour of the Republic of Uzbekistan jointly with the Korea International Cooperation Agency (KOICA) project “Development of vocational training opportunities in Uzbekistan” started in Samarkand.

The delegation of the Korea International Cooperation Agency (KOICA), led by its President Kim In-shik arrived in Samarkand.

Members of the South Korean delegation accompanied by Minister of Foreign Economic Relations, Investments and Trade of Uzbekistan E.Ganiev and Minister of Labour A.Abduhakimov laid flowers to the grave of the First President of the Republic of Uzbekistan Islam Karimov and paid a tribute of respect to his memory.

Within the framework of implemented jointly by the Ministry of Labour of Uzbekistan and the KOICA project “Development of vocational training opportunities in Uzbekistan” graduates of professional colleges of our country and unemployed citizens are trained demand in the labor market occupations. For this purpose, in 2012, Vocational Training Center was opened in Tashkent. During this period, it has trained more than 2 thousand young men and women, who were provided with jobs in their specialty.

In 2015, work for the organization of a similar center began in Samarkand. It is specialized in training specialists in providing vehicle technical services, welding and mechanical works, electrical and electronics, information technologies.

Over the past year here was implemented a large-scale creative work, based on fully meeting the requirements of modern architectural project, were built teaching and laboratory buildings, workshops, dormitory and other ancillary buildings.