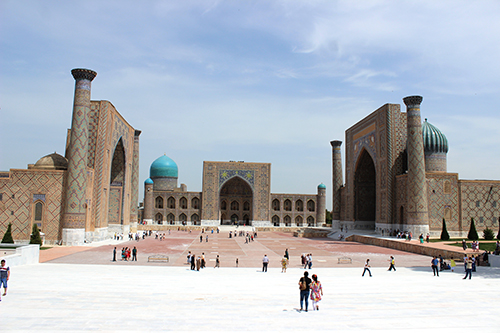 Ancient and still more majestic Samarkand is impeccable. To get an idea of a powerful city, you need to visit this ancient place. Not for nothing that the city was recognized as one of 50 cities in the world that should be visited.

Every two years, in the city of Samarkand, Registan Square hosts the music festival "Sharq taronalari" which means "Melodies of the East". Foreign guests visiting this event are not limited to the city of Samarkand but also visit the areas of the Samarkand region as Pastdargam, Payarık, Jombay, Urgut, Samarkand and Taylak districts getting acquainted with different aspects of cultural and social life.

During the visit of the President of the country Shavkat Mirziyev to the Samarkand region in April of last year, a number of indications were given to create favorable conditions for the wide familiarization of tourists with the objects of tourist, historical and architectural heritage, the revival of tourism and, in general, the further development of the tourist potential of the ancient lands. Proceeding from this, certain work has been done. In particular, specific measures were taken to implement pilgrimage tourism in the Samarkand region.

In the territory of the region there are 1105 archaeological, 670 architectural, 37 historical places of interest, 18 monumental and 21 memorial zones with a total of 1851 objects of cultural and historical heritage that is an indicator of enormous potential. Visitors are given a tour along the routes to the mausoleum of Amir Temur, the ensemble Registan (mosques Sherdor, Tillakori and Mirzo Ulugbek madrasah), the mosques Bibikhonum and Khazrati Khizr, the Shokhi Zinda and Khoja Donier complexes, the Ulugbek observatory, the Nodir Devonbegi complex and the Khoja Ahrara Vali mosque in Samarkand district, Gavsul Azam, Khoja Omon and Chor Chinor complexes in Urgut district, Imam Al-Bukhari complex in Payarik area, Hazrati Dovud complex in Nurabad district. Public order is controlled by video surveillance cameras installed in all places of pilgrimage, and the visits of tourists and guests are held with the participation of tour operators and law enforcement officials.

In addition, the new routes included museums Afrasiab Uzbekistan and Rugian studies, the town of Dobusia in Pakhtachy district, the historical monument of Chelak Koktep in Payarik district, and the complex of Mahdumi Azam and other places.

A number of activities are carried out to further expand the activities of museums in the Samarkand region and to strengthen their cooperation with museums of foreign countries, including in the field of research. In this regard, relations with specialists of archaeological institutions and museums of Japan, France and South Korea have been established. In particular, the fresco " the room of ambassadors", wall paintings are being gradually restored, located on the hills of ancient Afrasiab, the city of Sogdiyona (ancient Maroqand or Afrasiab) is reflected in the appearance of 3D tracks provided for tourists. The Samarkand State Historical, Architectural and Art Museum and the Institute of Archeology of the Academy of Sciences prepare booklets on historical monuments of Samarkand.

In addition, there are 37 visiting zones in the Samarkand region and 18 monumental places in the region employing more than 120 cultural workers who will provide guests with information about historical sites.

During the tourist season, more than 100 hotels provide services to local and foreign tourists, and more than 30 restaurants in the city center and surrounding areas prepare national, Korean, Russian and European cuisine and entertainment for these guests. Guests being in these areas, the department of organization of mass events in the regional administration in order to improve the security of people and keep the public order, there has been established a special Commission for Security.

Taking into account the large flow of tourists during the tourist season, proposals were made by the Railways of Uzbekistan and the national airline "Uzbekistan Airways" for additional flights. In addition, the Tourist Information Center was established at the International Airport of the city. Here anyone who wants to get acquainted with the maps of tourist sites can get obtain various distribution materials reflecting the tourist potential of our country.

In the Samarkand region, the roads leading to the Hazrat David complex were reconstructed, the roadside infrastructure was renovated and restored. Territorial entrepreneurs were granted land for personal services. As a result, 2 modern hotels were put into operation, including medical rehabilitation, sports complexes. The objects of trade, service and catering have been updated. For this purpose, 56 billion soums of local investors and 4 billion soums of commercial banks were attracted.

At the same time, in the region projects were prepared jointly with the district khokimiyats for the development of agricultural, ecological and sports tourism, and many of them were started. In the Kattakurgan district, Ergash ota, sanatoriums are provided for in the Oshdarya district of Ustoz, in the Zhomboy district, the recreation area Chilmaryam-ota, in the Lshshrabad district of the settlements Pangat, Qizilbel, Qoratosh and Jonbuloq is characterized by beautiful nature and clean air. The cave "Omonkuton", recreation area "Qorasuv" in the Taylak region, the Smarkand rowing channel along the Great Uzbek tract. And there are a lot of such wonderful places.

THE OPINIONS OF FOREIGN TOURISTS:

Kanibek ASANBAYEV, executive director of the "International Charitable Foundation" and "Public Fund of the House of Saidov":

- Four Kyrgyz citizens including me, arrived in Samarkand by car. Long since, the Kyrgyz and Uzbek are fraternal peoples. Morals, language, religion - are the same. The entire Kyrgyz people recognized that the friendly ties between the two peoples were restored in connection with the initiatives of President Shavkat Mirziyayev. Arriving in Samarkand, we visited the Mausoleum of Amir Temur, the Registan Ensemble, the Temple of Islam Karimov, Bibi Khanim, the Khazrati Khizr and Khodja Donior mosques. We were amazed at the big changes in Samarkand.

Representative of the Board of Directors of the Turkish Travel Agency:

- At the end of last year, on the initiative of the Uzbek government, a trip to your country was organized. The uniqueness of this land is the crossing of the Great Silk Road. Everything in this country is beautiful, original traditions. Tradition of mastery is very rich and it is the world for a separate conversation ...

Our trip was to our liking. Now our task is to tell Turkish tourists about these miracles. Obviously, they will bewitch them and draw into beautiful cities.

The agreements on tourism have reached a new level between Turkey and Uzbekistan. For three days we got acquainted with the potential of ancient cities. We believe that such relations in the direction of tourism will be further developed, expanded and strengthened.