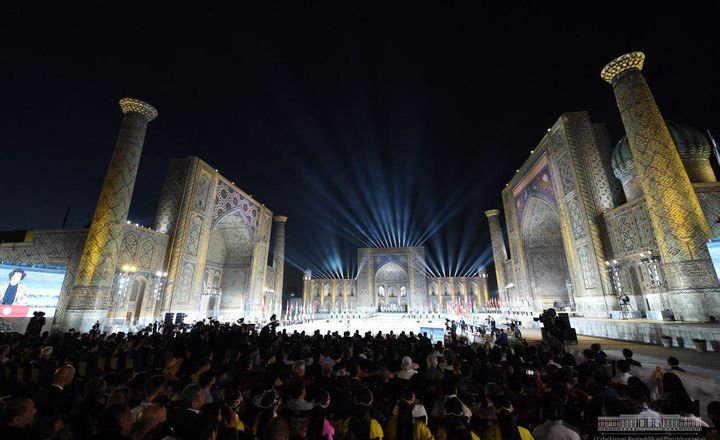 On August 26, President of the Republic of Uzbekistan Shavkat Mirziyoyev took part in the opening ceremony of the twelfth international music festival "Sharq taronalari" and delivered a speech. The head of our state expressed his pleasure to see the guests in our country and congratulated the guests on the occasion.

He said that the conference has become a peculiar space for various civilizations, peoples and nations, and that every artist who steps on the Registan Square, connects hearts and peoples to the nations, regardless of nationality, language and religion. - Music as a cultural phenomenon has unlimited potential for upbringing and nurturing a new generation. The attitude of young people who are interested in art to life, their respect for national traditions and universal values will be high,

Odri Azule, the head director of UNESCO  said that the festival in Samarkand is a great state of Amir Temur and the Registan Square is a testament to the heritage of Mirzo Ulugbek and this heritage  has attracted scientists, handicraftsmen and artists here during centuries.  He noted that  preserving the universal history and the development of universal language music are within the UNESCO responsibility, and that the organization intends to expand its cooperation with Uzbekistan.

This year's festival has been attended by 340 delegates from 75 countries. The head of our state called them true ambassadors of art, ambassadors of peace and goodness.

On the theme “Prospects for the development of traditional Music in the Orient”, the international scientific-practical conference was held as part of the festival.