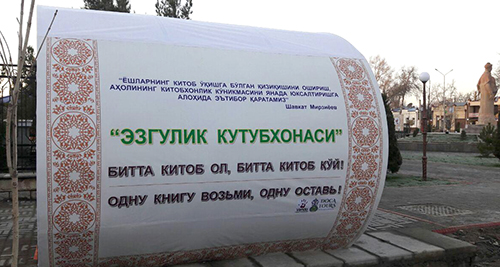 “Kindness library” has been organized near the recreation park named after Alisher Navoi, in Samarkand.

The project is created by Khayrulla Mamasoliyev, Oybek Ostonov and Dilshod Alimov. In the future, it is envisaged to bring the number of libraries in the city to 35.

– Systematic work on improving reading culture among the population is being carried out in Uzbekistan, – says one of the authors of the project Oybek Ostonov. – This project will be improved step by step. By the end of this year, such libraries are planned to be established in higher education institutions, markets, bus stops, railway stations, airports, parks, neighborhood centers and crowded places. Sponsors are showing their initiatives in providing them with necessary books.

The library serves all segments of the population under the motto “Take one book and put another!”