DELEGATION OF ISLAMIC SCHOLARS OF THE REPUBLIC OF TURKEY VISITED SAMARKAND

DELEGATION OF ISLAMIC SCHOLARS OF THE REPUBLIC OF TURKEY VISITED SAMARKAND 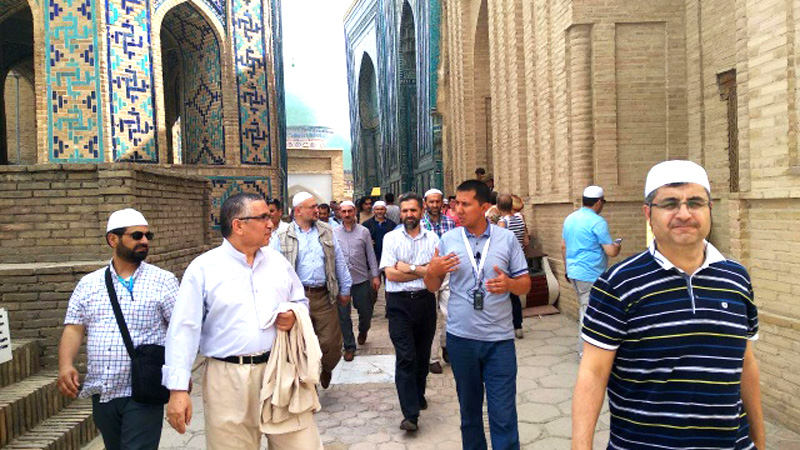 Pilgrimage tourism in Uzbekistan is developing at a high speed. Currently, activity is being carried out in several areas, for example, tours for representatives of Islamic community, mass media, as well as tour operators to promote this direction.

On June 1, 2018, delegation of Islamic scholars of the Republic of Turkey arrived in Samarkand. Such an event became possible after large-scale work of the State Committee for Tourism Development with khokimiyat of Samarkand region and the Ministry of Foreign Affairs of the Republic of Uzbekistan. Guests visited Khoja Ahror Vali mosque, Imam Moturidi mausoleum, Registan square, Shakhi Zinda complex, Emir Temur mausoleum. They also visited one of the most revered places of pilgrimage in Islam – Imam al-Bukhari mausoleum and read prayers at the tomb of great Imam.

As reported by the Press Service of the State Committee for Tourism Development, a meeting was held at Imam al Bukhari International Center, where a memorandum of understanding, cooperation in research, development of bilateral relations between universities of Turkey, such as Kastamonu University, Ibn Haldun University, Istanbul Sabahattin Zaim University, Recep Tayyip Erdogan University and the Center for International Studies was signed.